Building quests in a massively multiplayer online games is a daunting challenge. How do you craft a memorable experience for a player when sharing an environment with thousands of others? Many games resign themselves to a diluted experience by simplifying their quest line.

Chop 5 woods to make a bow.
Bring this letter to the king.
Fetch me 3 golden flowers.
Kill 8 orcs.

Others believe that to offer a different experience, the typical MMOG mold must be broken. One such company is Arena.Net, which introduced GuildWars in 2005. Strongly story-driven, Guild Wars sacrificed some of the massively multiplayer aspect in favour of storytelling. In towns, players enjoy typical MMOG experience, interacting with hundreds of players. However, outside town, player groups were separated in instances, allowing them to enjoy the world without outside interference. The game provided a powerful story experience through the use of instanced mission, which could be revisited for increasing rewards.

Guildwars did lots of things correctly, which earned it many praises and awards. Great debates were fought over its heavy use of instances, calling it a COG (Colaborative Online Game) rather than a typical MMOG. However, the game was mostly critiqued for its lack of auction house and crafting system. In addition, several design decision, such as multi-classing, hindered efforts to properly balance and expand the game.

To the great surprise of players, in 2007, only two years after releasing the game, Arena.Net announced that it was stopping any further expansion of GuildWars to start working on GuildWars 2.

The sequel was released 5 years latter, in 2012, and featured many incredible improvements over the original game. Instanced zones had been removed in favor of shared environments. Players were free to run, jump and swim accross new lands, exploring their new-found mobility. During their travel, players would meet various citizens of the land, many of them in needs of assistance. Throught the dynamic event systems, players would be assigned quests that would be integrated into the world into a seemingless fashion.

One example is a farmer found in an early area of the game. You can help this farmer with his crop, earning yourself a reward. However, this same unfortunate farmer is sometimes attacked by bandit. Players are asked to help the farmer fend off the bandits. If the players are sucessful in fending off the invaders, they will be given the opportunity to chase down the bandits to their lair. If not, the farm will be occuped by the bandits and players will be tasked with freeing the farm. 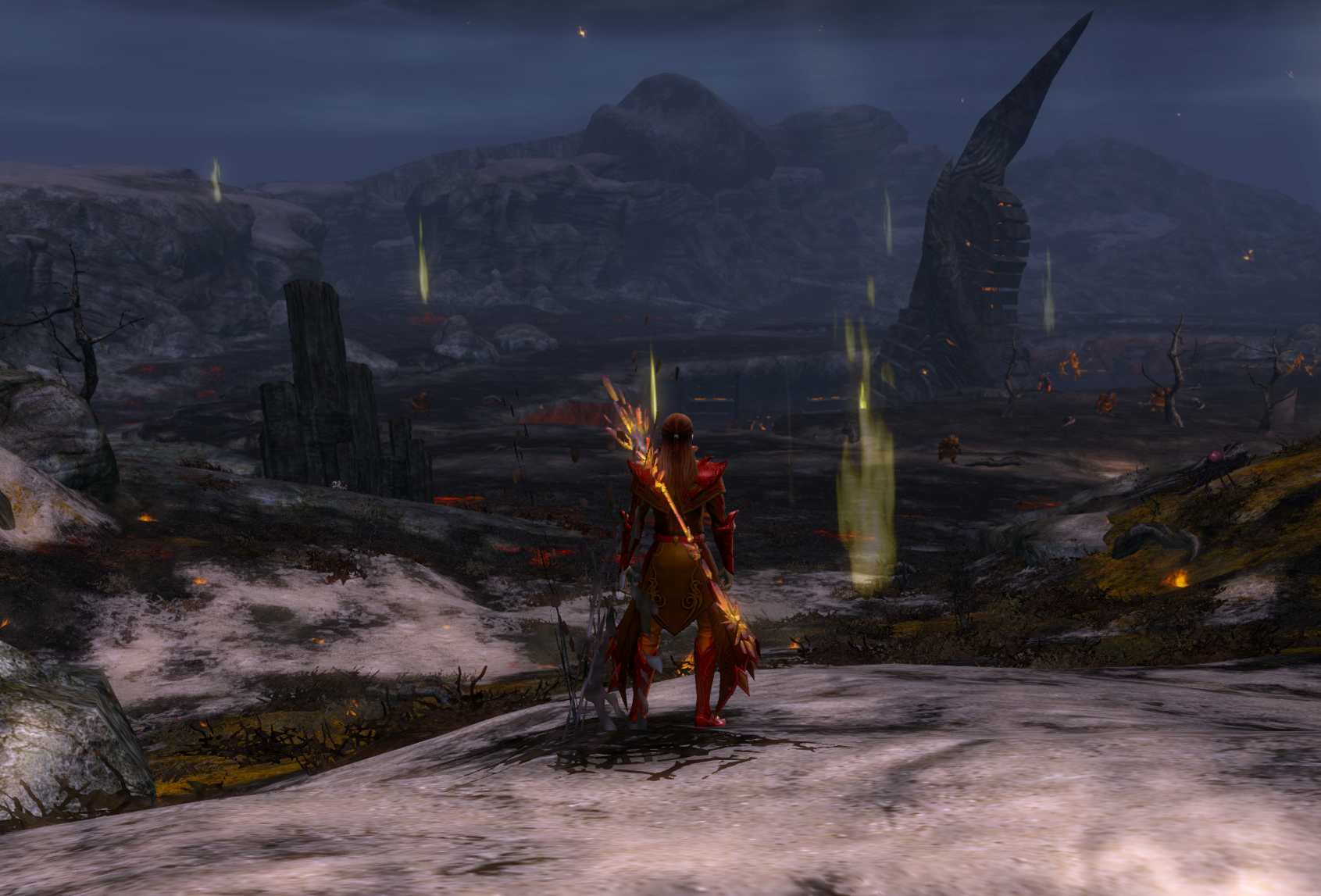 Initially, this create the illusion that players actions can actually shape the world. However, the sad reality is that the farmer will most likely be continuously attacked by bandits every 10 minutes, a sad fate for the farmer in question. Regardless, the dynamic quest system revitalizes the assumptions of how quests should be designed and integrated into the world.

GuildWars 2 still relies on seperate instances for story-telling. These moments of the game, dubbed "Personal Story", are played out in instances reserved for a player and other members of his parties.

The main fault in GuildWars 2's storyline is that "Personal Story" moments are often short and require players to travel between instance. For example, a faction leader will ask the player to meet him in a particular location. After being assigned a mission, he will have to travel to a secondary location to meet the mission "partner". The player will then travel to a third location to start the mission, only to travel to a fourth location to complete it. After such, the player returns to the first location to report on the events of the missing.

In GuildWars 1, such a mission would have been built as a single experience, were the player enters the mission and takes about half an hour to complete all the objectives. Although this limits all objectives to a single location, it is a single coohesive experience. In GuildWars 2, each time a player is required to travel to another location, he looses the feeling of immersion and is left with a feeling of disjointedness.

The economy of the original GuildWars was heavily criticized for now not having a crafting system or an auction house. In a Monash Research Report, it theorized that the database architecture would be the main limiting factor to an auction house.

Regardless, GuildWars 2 introduced both a crafting system and auction house. In addition, it introduced a premium currency, Gems, which can we transformed into game currency (gold) or used to purchase game upgrades/customizations. The decision to introduce this currency was very controversial, especially given that players could simply use this currency to accelerate their game progress. However, Arena.Net believes that is simply empowers a player to spend the amount he desires in his GuildWars 2 experience. Regardless, the addition of this currency has greatly contributed to reducing gold farming, the bane of any MMOG economy.

The introduction of the auction house was more problematic. Although an auction house empowers players to create commerces based on their crafts and treasure finds, it increases accessibility to top-tier items. As such, any loot that is not top-tier is instantly useless. Diablo III faces similar issues and developers have scheduled the removal of their auction house.

Much like the original game, GuildWars 2 is a work in progress. The game is not perfect, and Arena.Net has worked on addressing some issues. One such example would be be the revamp of the "magic find" system. In an economy report, John Smith, Arena.Net's resident economist, described Fine and Masterwork items as available in large supplies, with over 75% of them sold to a vendor at low prices. With the new "magic find" system, these item can now be salvaged for "luck component", allowing a player to increasing his/her luck and thus find better items. Unfortunately, other aspects of the game, like the personal story, have mostly been ignored by regular updates.

Don't get me wrong, GuildWars 2 is a great games that improves on the original in many ways. Unfortunately, successful aspects of the first game are lost because of these improvements. The fundamental reality is that building a game like GuildWars is very difficult, and the game designers should be applauded for their hard work. The most important thing Arena.Net can do is to continue to acknowlege these issues and continue improving on them. As with the original GuildWars, I consider this a work in progress.

Corona SDK : the Good, the Bad and the Ugly