Two weeks ago, I told my friends that we were living in a strange time: “We had two good games based on franchises, Batman and Transformers”. He agreed. There we have it, Transformers, War for Cybertron is pretty amazing.

The first level just blew me away. The first rule of a Transformers game is that you should be able to transform anywhere. This game implements this to perfection. You never really feel constrained to a given mode, you just pick the mode that seems appropriate at the given moment. It’s hard to describe, but the transformation just feel authentic. It’s the most amazing feeling to speed up a ramp in vehicle mode, jump it, transform in mid air and start blasting in the air, only to come crashing down on your enemy with a crushing attack.

The game was built using the Unreal engine, which is still magnificient despite it’s age. The Transformers character feel strangely remicient of Gears of War or Unreal Tournament 3 characters, with bulky shoulder and broad backs. This look works very well for the characters, and it is my understanding that the toy line is selling quite well. As a side note, I own the Optimus figurine and he’s pretty impressive. He’s also freakishly difficult to transform, as my girlfriend will testify. The scenery around Cybertron is simply breath taking, as you speed down long highways to the next battleground. The game makes you feel how much the planet is ravaged by this savage war. 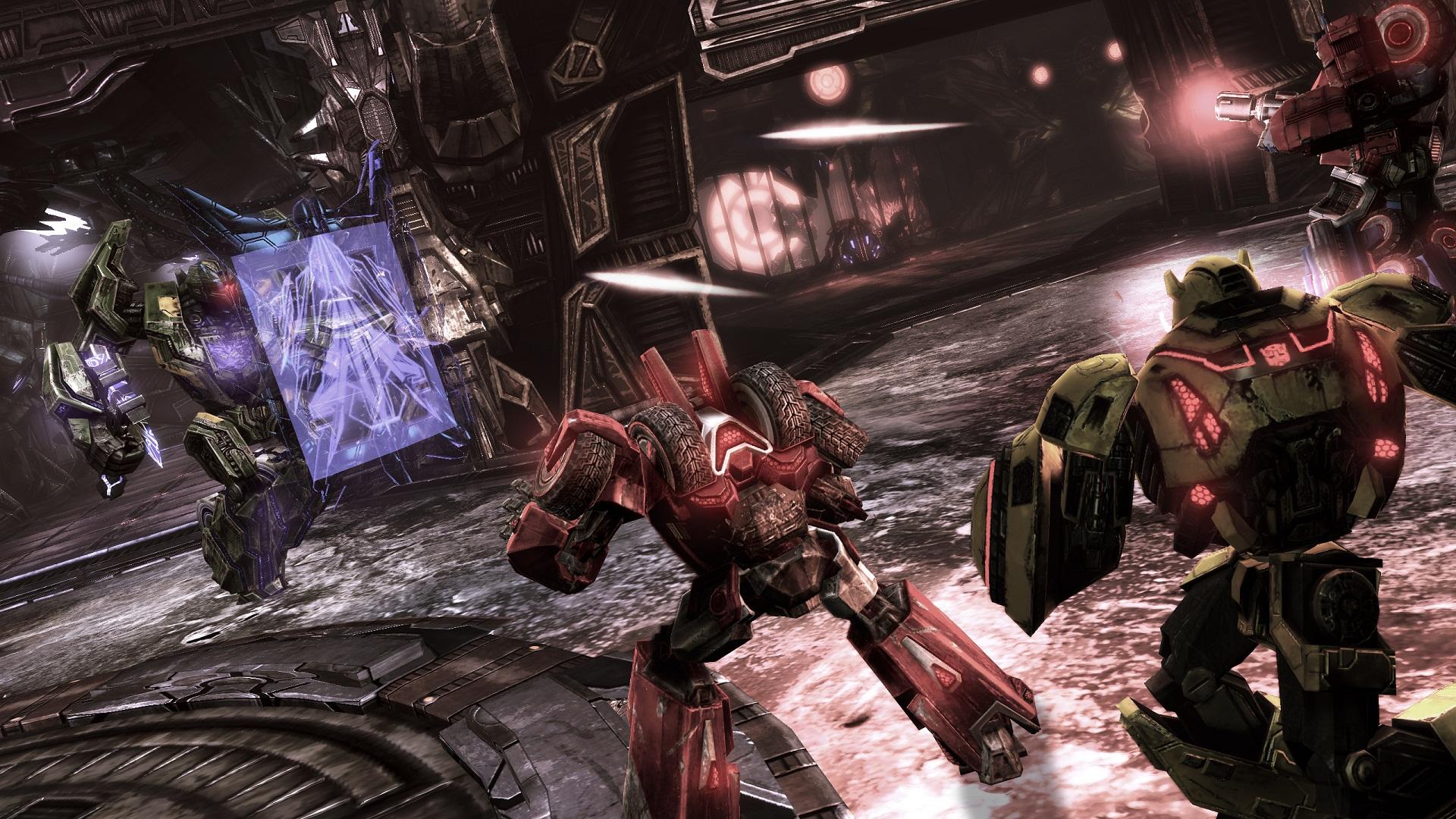 Being a big fan of Halo and Mass Effect, I find myself sometimes starved for good music. Although these games provide and impeccable soundtrack, I find the moments of high music tension are few and far in between. In TWFC, the music provides a very high tempo and a constant air of danger. The addition of a Stan Bush song is a very nice touch. The sound effects and beyond reproach and provide a completely immersive experience. And no Transformers game is complete without the voice of Peter Cullen as Optimus Prime. I found all of the voices to be highly appropriate, except for Bumblebee, whose voice just doesn’t seem right to me. On the other hand, it’s a lot better than having to talk using only Tv and song quotes.

The game play is quite enjoyable and the pace is good. The game keeps you always at a high pace: you are either fighting or racing to the next fight. Although some sections of the game were particularly challenging, the overall challenge level was good. The end of level bosses were, like in many games, impossible to defeat unless a special strategy is used. Luckily, the learning curve of the game is pretty good and I never had to much difficulty discovering how to defeat a particular boss. The game always provides some obvious visual clue. However, I found myself spending a lot of time looking for ammo, especially during long firefights.

My main complaint is that both of the campaigns feel like mirrors of each other. They each feature one jet level and both center around the destruction of a large boss character. Even the cast seemed mirrored, with the addition of Silverbolt and AirRaid to complement the seeker jets. Although I understand some of this symmetry was done to better balance the multiplayer matches, this seemed to carry over a bit too much to into the single player campaign.

As I’ve mentioned before, I was tremendously impressed by this game. I felt that the single player experience was a bit short, but generating such high-level content is expensive these days. I haven’t had a chance to try out multiplayer, as my Xbox Live subscription is currently expired. However, I’ve seen some good comments around the net about the multiplayer. Most interesting to me is the Rpg aspect, where a character can be created, customized and leveled up.

This game is a must of any Transformers fan. Fans of shooting game will also appreciate this game, simply for the added intricicaties of Transforming. This game can also provide an alternative for younger kids and shooting games, depending on your views on robot violence. However, people with troubles with Fps or adventure game might find this game a bit difficult.

Transformed WFC beats all expectation, delivering a solid experience. The game is a bit hard to find on console, but you can always get it on Steam.

Once Upon a Blok